Message us your enquiries
All fields are required.
Mail sent successfully. We will get in touch with you shortly.

“Even if oil prices fluctuate, our job continues, including during the end-cycle of the wells.” — Thien Chiet Chai, Reservoir Link executive director.

But well services expert Reservoir Link Energy Bhd, which is slated to debut on Bursa Malaysia’s ACE Market on July 15, is confident that its business prospects in the medium term warrants further investment for expansion.

“We follow the market, and based on our intelligence, the market is there for well services,” said Reservoir Link chief executive officer-cum-managing director Datuk Wan Hassan Mohd Jamil after the company’s prospectus launch today.

And while Petroliam Nasional Bhd (Petronas) is cutting down on its capital expenditure, to date none of its production contracts has been cancelled, Reservoir Link executive director Thien Chiet Chai noted. “Even if oil prices fluctuate, our job continues, including during the end-cycle of the wells. Our outlook is still pretty positive overall,” Thien said.

Reservoir Link’s core expertise lies in perforation, wash and cement (PWC) – a service required throughout an oil well’s life cycle – which contributed around RM43 million or 53% of its revenue in the financial year ended Dec 31, 2019 (FY19).

The group is also involved in well testing service, which contributed RM14 million or 17.5% of Reservoir Link’s FY19 revenue.

The group wants to raise RM23.42 million from its listing, of which RM10 million will be used to part-acquire well-testing equipment. Having its own equipment would help improve margins, it said.

It is also involved in well leak repair, wireline services and production enhancement services, with clients in Malaysia, Vietnam and Mauritania.

While its FY19 revenue came mostly from Malaysia, Reservoir Link’s prospectus showed there is potential demand for PWC services from its client in the Mauritanian market, which was hit by value-chain disruption due to Covid-19.

Its IPO is now attracting some prominent names as potential shareholders, including Serba Dinamik co-founder Datuk Awang Daud Awang Putra who was seen at the prospectus launch and has expressed intention to take up a stake in Reservoir Link.

Also sighted during the launch was businessman Datuk Seri Chiau Being Teik, the controlling shareholder of Chin Hin Group Bhd.

Reservoir Link’s IPO involves the public issue of up to 57.13 million new shares, representing 20.04% of the enlarged share capital of 285 million shares, at 41 sen apiece.

There is also an offer for sale of 31 million shares or 10.88% of Reservoir Link’s enlarged share capital by Pansar. Thien, Wan Hassan and Mad Haimi are also offering some of their direct stakes up for sale.

Loss making in FY16, the group managed to turn around with a net profit of RM1.02 million in FY17. It then continued to grow its bottom line with a compounded annual growth rate of 209% over the subsequent two years.

July 1 is the closing date for the IPO application. 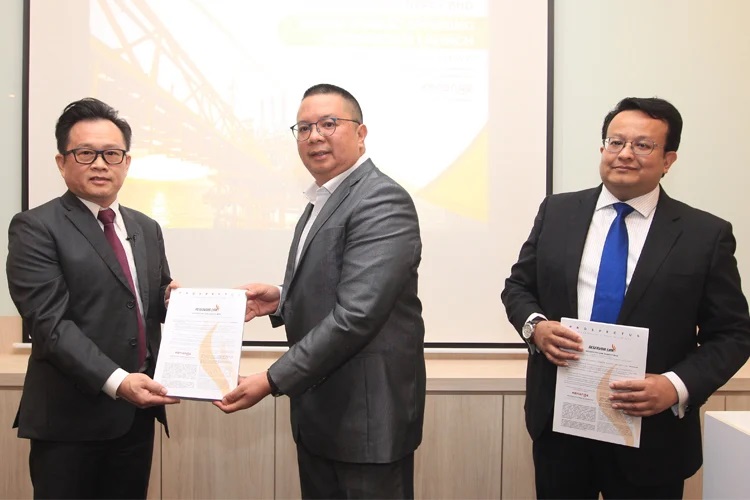